There is a direct connection between the discriminatory treatment of religiously observant Ethiopians who work in a winery and the government’s continued delays in carrying out its decisions to bring the remaining Jewish community of Ethiopia to Israel, according to Alisa Bodner, spokesperson to foreign media for the advocacy group Struggle for Ethiopian Aliyah.

She told JNS that “the Ethiopian-Israeli community is fuming, and they will not remain silent.”

Shortly after the June 18 ministerial committee meeting headed by Israel Prime Minister Benjamin Netanyahu delayed a vote that would facilitate the aliyah of 8,000 remaining Ethiopian Jews to Israel, Barkan Wineries announced its decision to remove its Ethiopian workers from departments in which they touch kosher wine — a decision based on doubt over their halachic status as Jews.

After upgrading to the most stringent Israeli kosher certification, the Eda Haredit ultra-Orthodox kosher certifier required the winery to prevent Ethiopian workers from touching the wine, in accordance to Jewish law that prevents the consumption of wine handled by non-Jews at certain points in the wine-making process.

The Ethiopian Jews in question, however, were considered halachically Jewish according to Israel’s Chief Rabbinate.

Since the exposé by Israel’s Kan news station that claimed discriminatory practices, followed by public outrage at the situation, Barkan Wineries announced that its Ethiopian workers would return to work on kosher wines. Following this decision, the Eda Haredit Kashrut authority froze the winery’s kosher certification for certain wines. 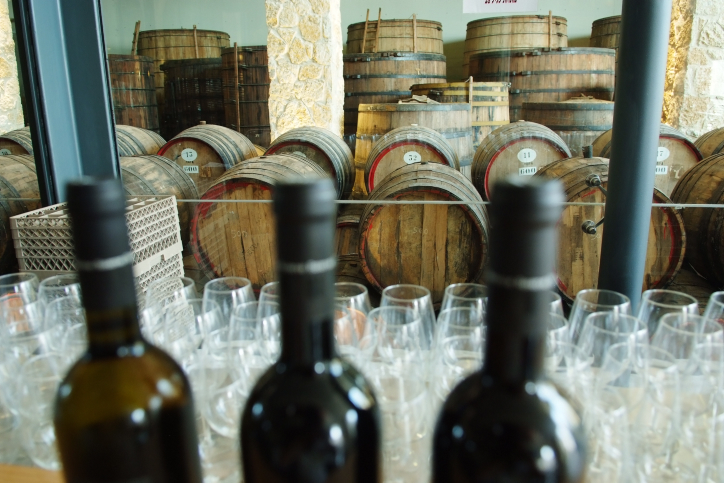 Wine barrels piled up at the Barkan winery. Aug. 2, 2012. Photo by Mendy Hechtman/Flash90.

‘The ingathering of exiles is prophesied’

But even with this announcement, the scandal has highlighted the plight of Ethiopian Jews in Israel, as well as those remaining in Ethiopia waiting to reunite with their families in Israel.

Aaron (A.Y.) Katsof, director of the Heart of Israel, an organization that is working with the Binyamin Fund to raise money to resettle these Ethiopian Jews in the biblical heartland, traveled to Ethiopia in April, and reported that the Jews of Ethiopia have been living in extreme poverty in Gondar and Addis Ababa for as much as two decades, waiting for the government to help bring them to Israel. He reported families living “in one-room homes with no running water or toilets. They cook on coal stovetops, and most children only eat one meal per day, if that.”

Each week, 100 activists and family members of those who remain in Ethiopia have been protesting in front of Interior Minister Aryeh Deri’s house, urging him to act at the ministerial meeting to bring the Jews home. The protestors wear white paint to bring attention to their belief that the government has not brought the final Jews over to Israel for racist reasons. According to Bodner, the group will be escalating its protests in other locations as well.

Many others also consider the doubt over Ethiopian Jewish status to be pure racism, including Chief Sephardic Rabbi Yitzhak Yosef, Knesset member Shelly Yachimovich and Katsof, who opined that the kashrut scandal “reflects on how a lot of people see the Ethiopian Jews,” a reality he told JNS is “very sad.”

He claims that in addition to racism, the government is holding back their aliyah because of financial and political reasons. “No office wants to allocate money for this, and there are political parties, such as ultra-Orthodox parties, that would lose votes in the next election if they helped facilitate this.”

“Many ultra-Orthodox believe that the Ethiopian Jews are not Jewish, while the more secular political parties do not want to bring Ethiopian Jews over who are more religious and would be more inclined to vote for the right-wing religious parties,” explained Katsof.

“The bodies delaying the Jewish immigration from Ethiopia are the Prime Minister’s Office under Benjamin Netanyahu and the Ministry of Interior under Aryeh Deri,” said Bodner. “This is the third time this year that a meeting was pushed off where a decision regarding the immigration was due to be made.”

This ministerial committee meeting is the final step in approving the resettlement of Ethiopian Jews waiting to make aliyah, following a government decision made in 2015.

“It is a shame and injustice that Israel—a country that opens its arms wide to immigrants from all around the world—has turned its back on the 8,000 remaining Jews of Ethiopia, who are waiting to reunite with their families and come to the Jewish homeland,” said Bodner, who maintained that it is the “responsibility of the Jewish community abroad to respond to this injustice, and to demand answers from local Jewish leaders and government officials in Israel.”

According to Katsof, it will take pressure on the government — coming from the people of Israel and brought to light by media coverage—to bring the remaining Jews home. He is confident that it will happen, as “the ingathering of exiles is prophesied in the books of Isaiah, Ezekiel and Jeremiah, and is already being witnessed today.”

In the long run, maintained Katosf, the kashrut scandal “will only help bring the last Ethiopian Jews home because it is awakening the hidden story of the remaining Jews in Ethiopia and helping to bring it to the headlines.”